I had to go way back to 1997 to find a year without any races recorded for January and February.  So for better or worse I was quite keen to find a race last weekend. I know there are a lot of runners who are reluctant to race unless they are 100%.  For myself, still  recovering from that pirformis problem ,I was keen to get some feedback as to how the build up was going and what would be required in training and racing in the coming weeks and months. Needs must and all that! 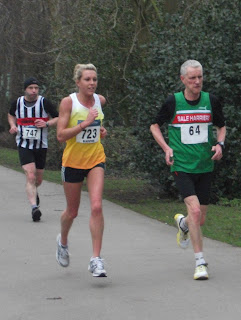 Regular readers will recall that 8 weeks ago I couldn't manage a 2 mile walk along the shores of Windermere without stopping several times so it was with some trepidation that I faced what would be ...all being well..my 132nd ,  the STANLEY PARK 10K in Blackpool..  With frequent twinges from the leg I wasn't expecting much but could I avoid it being another personal worse?  That being 45.19 on a very hilly Boggart Hole 10K last year.
Inevitably prerace conversation involves expectations and my reply to several was "anything lower than 45 would be a satisfactory start to the season". That would need 6.2 miles at 7.14. A pace I have only run at once in a 5X K track rep session.
Having managed my very necessary 2 mile warm up with only one interruption  it felt good to toe the line on the track in the park. We would complete nearly 2 laps before exiting for 2 meandering , virtually flat circuits of the paths of the park ; well used on this dry Saturday morning.    The warm up reveals that despite it being 2011 the race is mile marked as opposed to kilometres;  so I leave my garmin on mile splits.
The first mile shows 7.08...so far so good....followed by a 7.02 and a 7.06.  So confidence was growing as we (with Joanne Titterington in picture above) left the track for second half. My cautious start seems to be paying dividends as I'm pulling back faster starting runners continually and it's starting to flow. Sadly my attractive young companion has drifted back!
4th mile in 6.55...where did that come from....and I'm feeling the pressure, but still overtaking with no response (despite encouragement)  until one young man latchs on and adds support as we continue to go through.  He says he is looking for a sub 45.  I look at the watch again and say that is on the cards but we will have to keep at it!  5th mile in 6.48 and within minutes the track comes into sight. 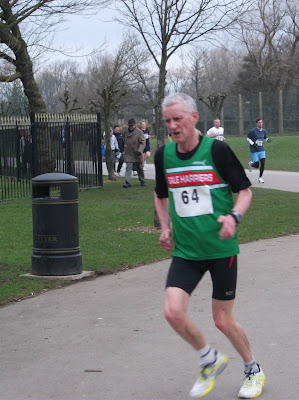 I'm really feeling it now but my young friend looks under pressure too.  I try to encourage him by teasing him that he can't let a 62 year old beat him, so just keep going!  We go through mile 6 in 6.49 and set up for a final sprint around the track.
No let up and a final charge  which sees us going through together in 43.28 !

Can't help but being very surprised with this season opener as it promises much for the immediate future.  But  those adrenalin fuelled miles of 6.55  6.48  6.49 on the second ciruit were hard work (witness picture left!) and if I'm to go under 43 minutes again I have to be doing that kind of pace and faster in training frequently...which I'm not.  So that needs to be addressed.
On the positive side the acceleration, with negative splits, was pleasing and shows that stamina levels are pretty good compared to many who fell away in the second half.   Some overtaken at halfway finished nearly 2 minutes behind. 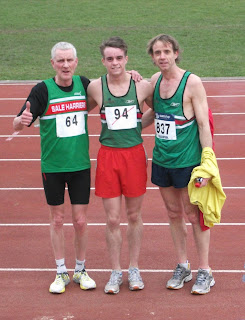 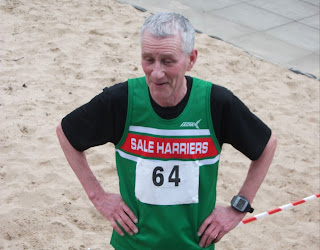