Decisions on the run

Still experiencing some discomfort in the legs  but with the sun high in the sky I thought a return to the reservoirs was called for.
But not entirely certain as I set out how it would go.  I've been keeping the runs flat. Could  my healing body  cope with the undulations of the trail?
I've not run more than 5 miles for a while. Could I cope with 6.5 miles?
Solution?  Give yourself an escape route, I thought. So I toddled off ,somewhat apprehensively, to go around, at least , the Fewston reservoir for a 4. I would have  the option  of going around Swinsty as well for a 6.5...... if all was going well.

Proceeding cautiously at what felt no more than a shuffle I was able to savour the splendour of the spring like day.  Once fully into the sun the gloves were off and I was becoming more than cosy in the Gore Softshell jacket.  The trail was littered with walkers similarly enjoying  a fantastic respite after the snow and so many dreary grey days.  Hopefully more to come.
Unfortunately, by 3 miles the old legs were beginning to shout perhaps 4 will be enough today.   I reached the point , at the end of the trail shown in the photo here .........

where I had to make a decision.  Left and down for 6.5 or right
and back along the dam  for 4.  The heart and lungs were saying left, what's the problem?   Both legs were saying, why risk it?  Quit while you're ahead,  live to fight another day.  Give yourself something to look forward to next week.  Go left and you might not  make next week!
A day in the past I would have gone left and suffered, run through it. Not wimped out.   Today.....I just did 4!
The trail run gave me a chance to try out the ADIDAS ADIZERO XT.  The outersole coped well with the tacky trail where the sun had hit and coped well with frosted sections in the shade.   No problems comfort wise straight from the box.  The cushioning proved more than adequate for my bony feet and I felt they offered good support.   I particularly like the way the heel counter external band attaches extends laterally to form the middle of the 3 adidas stripes. Clever.
The red/black is the 2010 colourway; the current in store colourway being ... 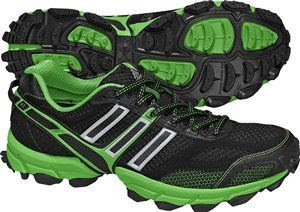 Just one model in an excellent trail offering from Adidas for 2011.
Posted by Terry Lonergan at 17:21