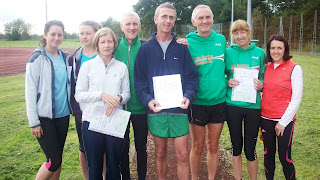 I don't really like entering races too far in advance.  At my age I never know how I'll feel one day to the next, never mind months ahead.   But when I looked at the MANCHESTER PARKS GRAND PRIX series it looked like excellent value for money at just £15 for 5 races and it wouldn't matter much if I had to miss the odd event.  Such good value that , similar to others, I phoned Brenda Bradshaw, the coordinator, to verify the price!
Of course. the aim was to run all 5 events and enjoy that sense of achievement in staying fit enough to complete a programme of races starting in  May and finishing in mid September.   As it turns out today's last event, THE BOGGART CHASE 10K,  is a "done deal" as they say in terms of my M60 age category.  Even if M60 leader, FRANCIS DAY (EASTCHESHIRE) doesn't run,  he has 12 points to my 8. There is only 3 points for a win; so I am resigned to second place whatever.
But of more significance  is how the breathing can cope with both the distance and the roller coaster course.
Last Sunday  in the gales I was forced to abort  the run and managed just 4.5 miles.   Monday and Tuesday were little better. Whilst things have improved through the week ( I managed the  2 res run in just over the hour midweek)  I haven't been anywhere near  race pace since a week last Friday.
I think Pat could sense my apprehension as  there was little conversation  during the hour journey over to North Manchester  for the 11.15 a.m. start.  At least  the weather would be kind to us after last year's drenching  as the mists of Yorkshire cleared as we made our way into bright Lancashiresunshine.
Walking over to pick my number up, I see and chat to Mr. Day so there will be no category prize today, I think.  Whilst we are chatting old friend Malcom Warburton comes and hands me a result sheet from April 1964  which is very, very interesting and one which I will come back to later in the week.
11.15 a.m. A small field of 110 runners assemble on the track.  The race starts with 2 and a half laps before exiting onto the roller coaster 3 lap course. This profile shows all fun we had.... 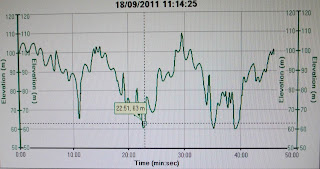 It was very much deja vu time in this first kilometre of the race,  looping around with the track with teammate JAN NICHOLLS as last year.   It was fun also nearly convincing a young man that it was 25 laps of the track making up the 10K!   "No hills, then?" he said.  "No dead flat!", I replied,  trying to sound dead serious.
A cautious start and Jan and I exit the track in 4.26.  We descend Charlestown Road and swing back into the park, maintaining pace at 4.26 but the first hill takes it's toil and I record a 5.01.  But the hill is not too onerous.  Flat past the track and downhill to 4k in 4.24, a climb sees the 5K mark reached in 22.55.  A longer hill in K 6 and a 5.02 split puts the brakes on a tad.  Again I cope quite well and take more places.
M60 leader is no where is sight but M65 Mike Cunningham comes on my back and gives me a
psychological "kick up the backside".   A 4.30 split and a downhill 4.13 but Mike is still on my shoulder as we pull away from much younger runners.  The last long is taken in 4.57. It's going to take a fast last to run under 46 minutes and put  put some daylight between me and Mike.
I manage to lift the pace, recording a last K in 4.11 to finish in 45.52, compared with 45.19 last year. Satisfactory. Bearing in mind the last month.  Garmin splits  22.55 and 22.55. Dead even.
M60 Francis Day beat me by over 4 minutes but the lack of faster M45s and M50s saw us old guys all moved up and so I was awarded the  M60 vouchers.
Pat filmed the event and it highlights how my problematic hamstring is hampering knee lft, drive and stride length.  I just don't feel confident going hard from the start despite over 2 miles warm up.   I just look like a fast walker!  Now some would say it's a swift efficient shuffle cadence but I think it's not a pretty sight and needs sorting !!
Today was the 137th and slowest 10K  but very reassuring all things considered.
ROBIN TUDDENHAM (TODMORDEN) won the race in 35:41 with host's BEV JENKINS (SALFORD)  first lady in 38:10, cheered on by her 3 young boys, resplendent in their Man. City shirts.  I handed her my Sweatshop vouchers after the presentation ....to treat the lads to some Man. United gear!
Quite a good day for the club with FRANK  CORDINGLEY (M50) JACKIE CORDINGLEY and daughter  BEATRICE and JENNY MILES also in the awards.   (SEE PIC ABOVE)