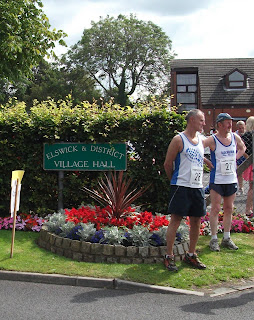 I suppose what makes a road race "low key" essentially is the paucity of particicpants.  I forecast about 120 for last Saturday's ELSWICK EXPRESS 10 mile race and wasn't far out as just 130 finished. Nevertheless several hundred pound will have been raised for a phoenix fund for the local Scout hut, twice the target of arsonists.
Of course relatively few competitors has certain advantage. No parking problems, ( if you arrive early enough), no toilet queues, no queues to enter on the day and over the start line within seconds.
In all these respects then the Fylde Coast race would fit the "low key" bill. But one big  disadvantage can be the lack of a group to run with and large gaps between runners.
The venue was easy to find just minutes off the M55 to Blackpool road.    The virtually flat course,  on relatively "quiet" country lanes,  was well marshalled; preventing runners cutting the corners which can course problems from cars for following runners.
The event went much to expectation.  Another  case of catch them if I can!
Having opted for my white mesh 2nd change strip as the morning temperature increased  I  set off aiming for splits as near to 7 minute per mile  as possible but I could feel discomfort in the right hamstring almost immediately and eased back a touch.
The field quickly spread and after just  2 miles  I was isolated. But I  could see 11 in front and hoped that if I could just maintain the pace,  recent races would suggest the younger, initially  faster runners  would start to wilt  in the warm conditions and come back to me one by one.  I say me but I was not alone on this  overtaking mission.
Another mature gentleman" had exactly the same plan.  He would over take, I would overtake.   But try as I might I just couldn't get to him.    Fortunately, Cliff Utting (Red Rose) was an M55 and so I managed to work through to win the M60 category. 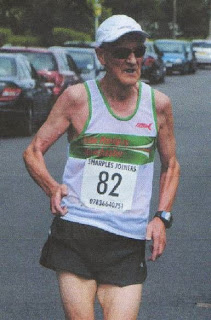