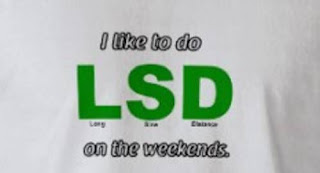 Saturday's short evening run after Friday's speed session was supposed to amount to a gentle 30 minute run on the grass.  But not entirely without purpose as I donned my Asics Fuji low profile trail shoes and spent periods of the run deliberately focussing on forefoot running and concentrating on good form. Afterwards I spent a few minutes working  the hamstrings with some  stretches on the move.  Seemingly harmless amd beneficial.  You would think so, wouldn't you.
Not so.  Setting out on this morning's canal 10 miler I felt as if I spent a week on a horse;  the groin area was so stiff and sore.  Two phrases were going through my mind.  The infamous title of Joe Henderson's old book,
Long Slow Distance (this run would be medium slow distance!) and the phrase , "the spirit is indeed willing but the flesh is weak".   "The spirit" was up for a good solid medium distance run around 83/84 minutes;  but the "flesh" was not obliging.   Not quite the Biblical meaning of the phrase but  you perhaps get the point.
Labouring through the first 2 miles in 9.27 and 9.36 I couldn't see the legs improving at all and was envisaging
a total time well over 90 minutes.  Medium slow distance indeed.  Henderson has always refuted that he never claimed that we should run LSD (long slow distance) all the time.  Just use LSD as a form of recovery running between races and sessions.  Of course like the bottle a night wine drinker who takes the advice that drinking red wine is good for the blood  to its extreme,  so many runners in the past heard that the phrase LSD was good and that's all they did. Consequently they became good at running long distance very slowly. Not what he had in mind.
Anyway today was to be one of those days.....until the groin gradually  dissipated and the paced picked up a tad.  But still only 45.40 at the turn.
From this point the "spirit was willing"  in that I was keen to take advantage of the wind behind and "the flesh" was less "weak" as much more respectable mile splits were recorded of 8.34  8.29  8.30 8.28 with  a final  mile  in  8.23.  A full minute faster than the first.   45.40 out and 42.26 coming back. Much better.
Based on those first 2 uncomfortable miles Besides it was important to make a return to a bit of distance with a half marathon pencilled in for September.   Scanning the training sheet had revealed a lack of distance work with 4 races run in  May.   At my age it's been a choice between speed work and distance in between races and the former has been considered more important.
So,  the end of another week.  A good solid week, I think, of 47 miles; returning the year's average per week to 40 (Chasing the numbers!)  but more importantly  a good length run today, a reasonable track session in a comfortable temperature for a change,  an undulating 9 miler on the trail  and a bit of  (short) slow distance in between.
Not far off the mid point in the year.   Mine has picked up well after the frustrating, troublesome start.  Hopefully yours is going well too!