A miserable P.W. at the BEST 5K

There's the race day plan and there's the execution of the race day plan.  They rarely match up 100%.  On rare occasions  the race may even go better than expected.    Conditions better than hoped for,  surface better than hoped,  compettion better than hoped and hey presto!...........a P.B. race day.
But usually  there's not a lot of difference between apiration and realisation of the plan.
At Lytham a fortnight ago I was looking for a sub 43 10K but windy coastal conditions and a  groin strain at 5 mile saw a 43.08 clocking.  Close......but no cigar as they say.  A few percent off thtat's all.
The plan today?   We would arrive before 10.00 a.m. for the 11 a.m. start.   I would enter,  complete a 3 mile warm up,  some stretching and some strides and be hovering ready for the off at 10.55.   My lungs would hopefully cope with the strong winds present once again and I would not be far off what should be a predictive time on or around the 21 minute mark.   I would add a couple of mile to round the exercise off.
It would be a reasonable 699th recorded race.
But with gales hammering Wharfedale throughout it wasn't a night for a perfect sleep and  it was with much effort that  I eventually extricated myself from under the duvet;  much later than planned.  Further hampered by traffic delays it was 10.25 by the time I started out on the warm up around MOOR  PARK, PRESTON  and immediately bacame aware that the strong winds would be a nuisance.
With the field assembling there was no time for the planned stretching and strides and at 10.59 we sprinted off into the headwind.   I knew from the warmup that after half a mile we would turn with the wind behind so if I could survive that the breathing would then improve.
What I didn't plan for was pain in the left calf after just 4 minutes!  I thought it would be just a tweek and it would fade away.  No such luck.  Instead of the planned 6.46 for the first mile  I was just over 7 and to add insult to injury  I was passed a  6 foot penguin loking like a refugee from Happy feet.
The rest of the race was a test of trial;  I kept thinking about the distance we'd travelled and stubbornly thinking about notching up that penultimate race to 700.  I would finish whatever.
At 2 mile I past another mature gentleman who'd stopped and encouraged him to join me in a last mile limp.  And by now I was dragging the left leg quite badly but with the wind now behind at least holding pace; albeit now a miniute slower than predicted.   No accelration as I usually manage then.....7.02  7.40  7.39 to the 3 mile marker.  Yes, as last week, it was mile marked not K marked.  Unbelieveable.
So, a final miserable P.W. of 23.32.    Slower than I manage on the track in training by myself.  Slower than I manage at the end of a 12 mile run   but hopefully no long term damage.   I wish I'd worn the calf sleeves  which I had considered but rejected.  4th M60  64th of the 185 who finished.
Needless to say there was no couple of miles  cooling down; just a hasty retreat home to commence the iciing process  as soon as possible.   So as they say FAIL TO PREPARE.........PREPARE TO FAIL! 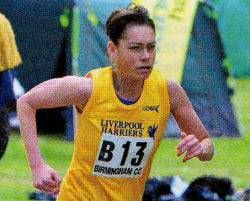 Consolation?  Well at least I beat the penguin whose flight of freedom had stalled by half way.
M35 JASON PARKER (Preston) scored his first victory for quite a while,  1.32 slower than his 2010 best.  F35 Liverpool international JENNY CLAGUE was first lady in 18.31 again 1.04 slower than her 2010 best.   Others were similarly slower. Perhaps the title of tjhe race as the BEST 5K needs to be changed!  It certainly wasn't for me.  A bad day at the office altogether.
Posted by Terry Lonergan at 17:53