FASTRAX ON THE ROAD 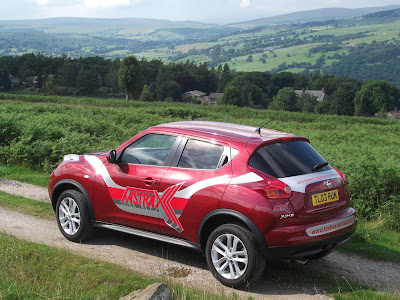 Fearful that Barclays would erode my pension pot even further I recently surrendered it in and have used part of the lump sum to buy a new NISSAN JUKE DIG-T.
I have had it "logo'd up" for the FASTRAX side of the business, so Pat and myself will be hopefully easier to spot at a race if runners want to talk club sales business or simply talk!
We don't envisage selling at the events,however. Not quite what we want to be returning to at our age! 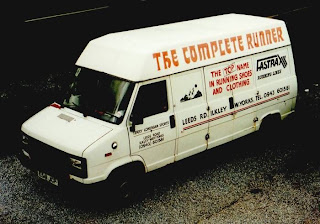 For many,many years Pat and I  would fill the COMPLETE RUNNER van and travel to races throughout the north on a Saturday and a Sunday selling our wares.  The routine was to arrive two hours before the race start time so that by the time the runners arrived we were set up and ready for any prerace business.
Ideally I would try to step out from behind the counter 20 minutes or so before the off so that I could do a bit of warm up before I took my place in the race field.  But often runners were still trying to buy socks or even shoes until the very last minute and my warm up would get out of the window. 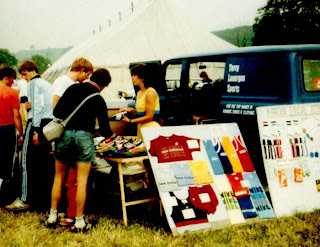 I recall one such incident, 30 years ago now, in 1982. We were set up selling at the Daffodil Marathon in Stockport.  I was just about to start my brief warm up when a  runner  dashed up to the stall saying he'd forgotten his shoes and desperately need a pair to race in. Whilst Pat sorted another runner out with new socks I served  the frantic runner and we dashed over to the start together.  Afterwards, having finished 12th in 2:33,  I sat on the grass by the van nursing my sore feet, battered and blistered from the 26.2 miles.
As I recovered  my last minute buyer  breezed up as happy as Larry saying,
"Great shoes,mate.  Not one single blister. Perfect!"
Very often  we had proved race support with COMPLETE RUNNER vouchers. This meant having to stay "open for business"  but with a big lull in selling  until the presentation had been completed,often hours after the first runner had come in.  Then of course the voucher winners would descend upon us like plague of locusts desperate not to drive home until they had "spent" their voucher.   Very  often we were the very last to leave.  It was hard work and meant for long days.
A few years ago we decided we'd done enough "mobile selling". We would sell the van.  We would  still enjoy going to races but I would be able to warm up properly and focus entirely on the race.