My love affair with the 10 mile race distance began back in 1974; a Saturday afternoon joint around Eccles in  Manchester. A race for which  for once I have no results.  It was a moderate standard, I recall.

Certainly not compared with the fast and furious YORK 10;  an event which was established in 1973 and was building a major reputation as one of best 10 milers in the North.  The 1976 running incorporated the Yorkshire Championships but in effect attracted a whole host of the North's top distance runners.
No fewer than 13 broke the 50 minute barrier in a race won by my training mater, Dave Slater (Bingley).  Me?  45th in a time of 52.58. I was Bingley's 5th runner.
In the years that followed my race programme would always include a few 10 milers There were plenty to choose from. Sadly most have ceased to be put on like the Chris Vose 10 and the Clitheroe 10. The (Rowntree Mackintosh) YORK 10 generally featured though; probably because we always sold at the event with the Complete Runner  van; which usuallly meant I had no warm up and was generally  last to toe the line.
I frequently refer to the standard of the 1983 YORK 10. That  year an incredible  322 ran inside the hour,   60 minutes for 10 miles. Yes, 322!
My 51.41, in a year of 4 marathons and several halves, was good enough for only 21st place. A time I only bettered once running 50.37 in Morecambe the following year.
I continued to run 10s every year until recently with none in 2009 and 2010 and only one last year.
So today there was a little bit of apprehension as to whether I could hold my maintain customary even pace for 10 miles as I normally do over 10K. Time, or should I say "times" would tell!
The night before a race I always check out the BBC Weather prediction; mainly to help decide what to wear.  With a forecast of 2 degrees and bright sunshine, it would be a long sleeve, hat, gloves and , with my eye sensitivity,the mandatory sunglasses.
Not having run a 10 miler for a while, I also consulted the RACE PREDICTION CHART.  This, from the Competitive Runners Handbook, showed that a 43.00 10K runner should be capable of 71.40 for 10 miles.
As my very recent 10ks have been 42.43 and 43.11 clearly a sub 72 minutes clocking should be achievable; demanding miles splits on or under 7.12.
I would run with the Garmin but it would merely record NOT dictate  the pace.  It would be my learnt ability to pace the race and my competitive streak which would be the main determining factor.  It would not be a case of a "self fulfilling prediction" of running to forecast and no faster. 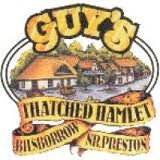 The weather forecast proved correct.  As we parked up at the venue, the GUYS THATCHED HAMLET ,hotel and pizzeria, parts of the car park were under ice and the few hundred yards from the gun as we exited at 10.30 a.m., demanded care.  A slight rise took the field of over 300 onto the St. Michael's Road and we were away into the flat local countryside with the roads providing no traction problems and the sun now strong and bright in a clear December sky. The shades proving a vital accessory.
The race mile markers and my garmin splits aren't in sync but it matters little. With the sun and the shades on I can't read the times anyway! It just feels OK.
But still after 2 miles I decide to step up a touch and running shoulder to shoulder with PAUL BERESFORD  of Rothwell we start to overtake and pull some of the fast starters back.
We pass a hardy runner  dressed for high summer. Skimpy shorts, race vest, no hat, no gloves. I ask him what he wears in July?  In contrast,  another is more than well protected with longsleeve and full tights but I wonder just when he is going to open and devour the 4 gel strips he has in his waist belt in a 10 mile road race. Amazing.
Not permitted in last week's Wesham 10K, today we pass many running wearing headphones.  Clearly they need faster music.
One says he is listening to Meatloaf.  He was running like a Bat Out Of Hell but would he keep it up?
Very often races are billed "flat and fast" but turn out to have some undulations.  Not today.  This is as flat as you are going to get. I think how great it be to run it in the summer.
The miles are knocked off one by one. The pace is relentless but still my Rothwell pacemaker has deserted me and is now several places ahead.
We reach 8 miles and  as last week there is a Perry now just in front. But it's not dad Steve, this week it's daughter Jayne.  I catch her and hoped to tow her through to the finish.
With the GUYS facility now in sight , I've pushed on to rejoin and pass Paul and a runner resplendent in his Skins long sleeve and tights. I turn into the car park expecting to find the finish around the corner but I can see it's exactly where the race started...... at the far end of the car park. How convenient.
Despite the potholes and  with the hamstrings now starting to feel quite fragile, I manage to hold off Paul (41.48 at last month's Leeds Abbey Dash!)
but the Skins devotee is not going to be outsprinted by this aged wrinkly and makes a Lazarus inspired dash for the line to beat me. The clock indicates I'm going to be inside 72 minutes. So I resist the challenge and my hamstrings thank me for not responding. 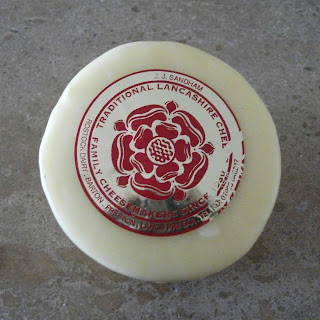 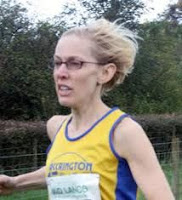